Benin’s epidemiological profile is characterized by a predominance of transmissible diseases as well as an emergence of non-communicable diseases. Much work remains to be accomplished in strengthening health systems and health coverage. If the quality of care and services could improve in local health structures, there would be less need for medical evacuation. 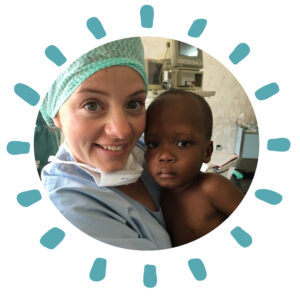 Since 2012, USFC has been present in Benin, working in partnership with the Lagune Mother & Child Teaching Hospital (CHU-MEL). In 2017, an additional partnership was formed with the Hubert Koutoukou Maga National Teaching Hospital Centre (CNHU-HKM). Both relationships aim to treat children, strengthen the capacity of local medical teams and provide improved medical equipment. In 2011, USFC also started an education program in partnership with Bien-Etre et Développement to encourage school enrollment and support disadvantaged students at school.

In 2017, USFC established the ECHOES program, a remote tele-health program at the CHNU-HKM. Using live streaming, Benin’s doctors were connected to French counterparts for training to improve their diagnostic skills for children affected by congenital heart diseases & esophageal stenosis.

Cases of severe burning are frequent in Benin, particularly as the result of accidents or the handling of poor-quality gas sold in the streets. The program started in 2017 and two missions were carried out in 2018 with the aim of strengthening the CNHU-HKM plastic surgery team in the treatment of hare lip malformations and severe burns. As it relates to severe burns, USFC supports the development of burn units concerning equipment, nursing treatment and physiotherapy. Across the two missions 26 children received plastic surgery.

In addition to plastic surgery missions in 2018, USFC conducted a training mission at the Ouémé-Plateau de Porto-Novo Departmental Teaching Hospital Centre in the southwest of the country. The mission enabled medical students studying for a Postgraduate Specialization Diploma in Pediatric Surgery (DES-CP) to carry out surgical operations under the supervision of teachers. In 5 days, the team was able to provide 350 consultations and 136 operations to treat hernias, bone fractures, bone diseases and enlarged spleen.

In 2011, USFC started a program in partnership with Bien-Etre et Développement to encourage school enrollment and support disadvantaged students at school. Bien-Etre et Développement has been active for more than 20 years in primary and secondary schools in the Hévié region and in an elementary school in Dossounou. In 2018, USFC supplied 94 children with school kits containing books, school uniforms and sport clothing. Children also received dietary aids including rice, maize, soy and other cereals. All 94 children achieved the required level of education and six were candidates for the Primary Studies Certificate.