Over the course of the past decade, Burkina Faso has made strides in updating the national health policy and development plans and upgrading health facilities so that they are regulation compliant. Strategic health priorities include those to reduce maternal, neonatal, and infant and child mortality. A key development focus will be implementing an accelerated strategy for child survival and development and the integrated management of childhood illnesses. 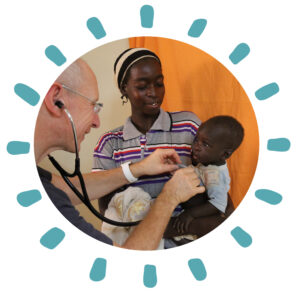 In Burkina Faso, facial tumors and noma, a rapidly progressing skin disease affecting the face, are poorly understood by both the public and community health workers. These diseases and disabilities often leave patients unable to feed themselves and with difficulties to hear, breath and speak. Access to treatment is unavailable, further compounded by superstitions which leave suffers ostracized from their communities. To gain control of the situation, USFC launched a facial reconstruction program in 2014 combining direct surgical care and training courses during two surgical missions per year. From this experience, a more targeted program was launched in 2018 to build awareness among the public, provide medical and surgical care to patients, and train local teams in three targeted regions in Burkina Faso.

In the first year of operation, USFC rolled out 130 awareness and training session in the Boucle du Mouhoun region. Sessions included education on the detection of skin diseases and other facial abnormalities as well as referrals and treatments for advanced cases. In tandem, community outreach through radio shows, street interviews and journalism, built awareness among the general public.

In 2019, these programs were replicated in the North Central region.