India is a fast-growing economy, however government expenditure on health is only around 1% of GDP and India faces wide health inequality within and among states. This has resulted in inadequate financial protection in health and high out of pocket costs, in fact, more than 62% of spending on health by Indians represents OOP and around 60 million people are pushed into poverty due to OOP. The country also faces relatively low health outcomes with high burden of communicable diseases, neglected tropical diseases, TB and a high risk of premature death. In addition, weak public health systems, poor health monitoring and a lack of infection control further exacerbate the problem. 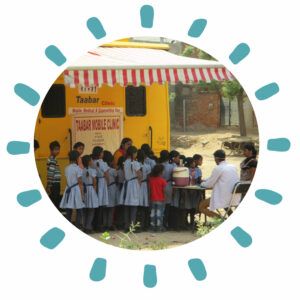 Since 2011, USFC has been focused on improving the education, protection and health of vulnerable children in Jaipur through our five day-centers. These centers work on a half-day schedule, before or after school to provide a safe place where students can benefit from tutoring and participate in recreational activities.

In partnership with the local NGO Taabar, USFC offers free basic healthcare and psycho-social consultations to children with a specific focus on education and training for girls. In our Day Centers, we offer lessons in Hindi, English and mathematics, and encourage participation in activities that build confidence and self-reliance, such as dance, theatre, and children’s parliament. We celebrate events including Diwali, Holi, Children’s Day and Independence Day in order to provide children with a better understanding of the unique perspectives that make up Indian culture. We have also taken part in street theater and parades as a means of community engagement, to build awareness on health, security and education questions. USFC distributes school necessities such as uniforms and shoes as well as hygiene kits, meals and drinking water. Through our mobile health clinics, we also provide basic healthcare and psycho-social consultations for children and the greater community.