Iraq is still recovering from long period of conflict and political turmoil. While modernization of the public sector remains a top priority, limited focus on good governance is affecting the implementation of laws, provision of services and effective management of the country’s resources. The health care delivery system in Iraq has historically been a hospital-oriented with less emphasis on preventive measures. About half the health centers are staffed with at least one medical doctor. The rest have trained health workers. Public health care facilities are not equitably distributed between rural and urban populations. While medical services in the public sector hospitals are free apart from nominal charges, many people choose to seek care in the private sector health centers to avoid longer waiting times in the public facilities and adverse perceptions of quality. The education and training of health professionals is carried out in the public sector, where education is free. There is no education policy or pre-service education strategy to guide the country’s health workforce production and there is no database on preservice qualifications or in-service training completed by staff.

Although military operations ceased in the autumn of 2017, the humanitarian situation remained difficult throughout 2018. At the end of the year, there were more than 2 million displaced persons and a third of them were in the Kurdish part of Iraq. Baghdad’s reclamation of territories meant a reduction in the human and financial resources available to keep medical and surgical departments operational. 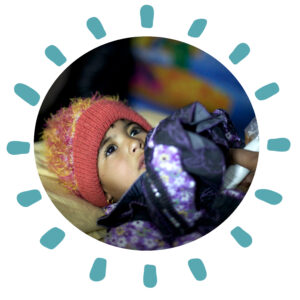 Thanks to the success of the Iraq program, in 2019, USFC committed to a new project in Sinjar in collaboration with Nadia Mourad, 2018 Nobel Peace Prize winner, and the Crises and Support Centre. Through this initiative USFC and its partners will construct a new hospital equipped with a proper operating theater to encourage the return of Sinjar’s displaced residents.

In tandem, USFC will continue its partnership with the reference hospital in Dohuk, offering surgical treatment for the most vulnerable including the displaced Yezidi population.