In Lebanon, key indicators of health outcomes have improved considerably and constantly over the past few decades.There is good coverage of services and high-quality treatments are available in major cities, though some rural areas remain underserved. The main cause of premature mortality in the country is non-communicable diseases (NCD). Unfortunately, the crisis in Syria has significantly deteriorated the social and environmental determinants of health. The maternal mortality has increased and mental health conditions including PTSD, depression and anxiety are on the rise.  Outbreaks of vaccine-preventable and water-borne diseases frequently occur due overcrowding and poor hygienic conditions in refugee settlements. Though, the country has a surplus of medical doctors, they face a shortage of nurses and midwives. Furthermore, there is a massive increase in demand for services due to the in-migration of over 1.5 million refugees from Syria which further strains the health system. 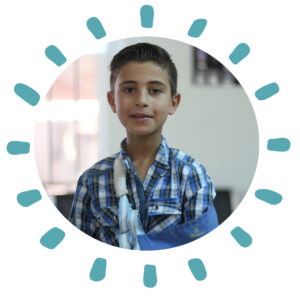 As mentioned above, the Syrian crisis has forced some 5.6 million people to leave and seek refuge in other countries. In Lebanon, the refugee population is around 1.5 million with an additional 1.5 million citizens considered as ‘vulnerable” by the Lebanese government.  Orthopedic problems are particularly neglected – bad diagnosis and poor treatment mean that disability is highly likely which can be very difficult for the children and a significant burden for their families and communities. In 2018, thanks to funding from the Crisis and Support Centre, USFC was able to continue with our surgery program for children living with congenital or acquired anomalies. 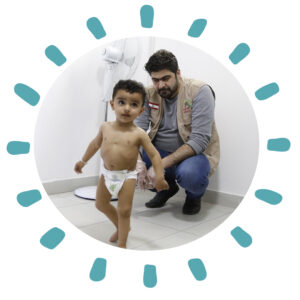 In partnership with the Union of Relief and Development Associations (URDA) and the Sacré-Coeur Hospital of Beirut and the Shtoura Hospital in the Bekaa Valley USFC facilitates access to surgery for children with orthopedic abnormalities. The program, which was first launched in December 2016, has expanded to identify and accommodate more children including Syrian and Palestinian refugees as well as local Lebanese children. With URDA, we have implemented a referral system in local health centers and with partner NGO’s to allow for better diagnosis, surgery, postoperative treatment, follow-ups, rehabilitation and physical therapy.

In 2019, we will continue this program and launch a branch for early detection of the more frequent orthopedic anomalies (e.g. club foot, congenital dislocation of the hip) so that children may access treatment as soon as possible and avoid permanent disability.

On August 4th, 2020 tragedy hit Beirut. Two massive explosions killed more than 100 people and left thousands wounded – many of them children. Following the blast, United Surgeons for Children jumped in to intervene. We were immediately in contact with our partners and colleagues on the ground to see how we could help and deploy aid packages to the region.

For more information on our response to the Beirut explosions, please click here.